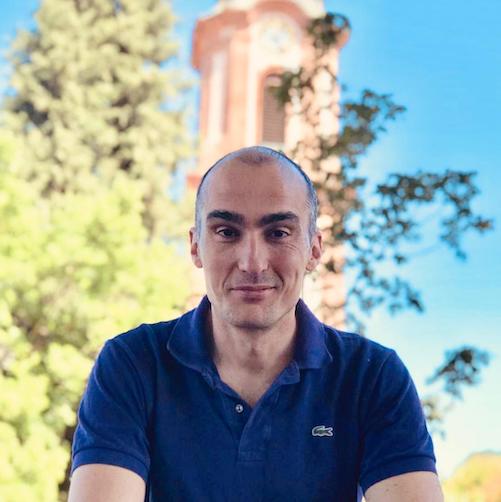 Physical Access as a Service: Using the Doordeck API 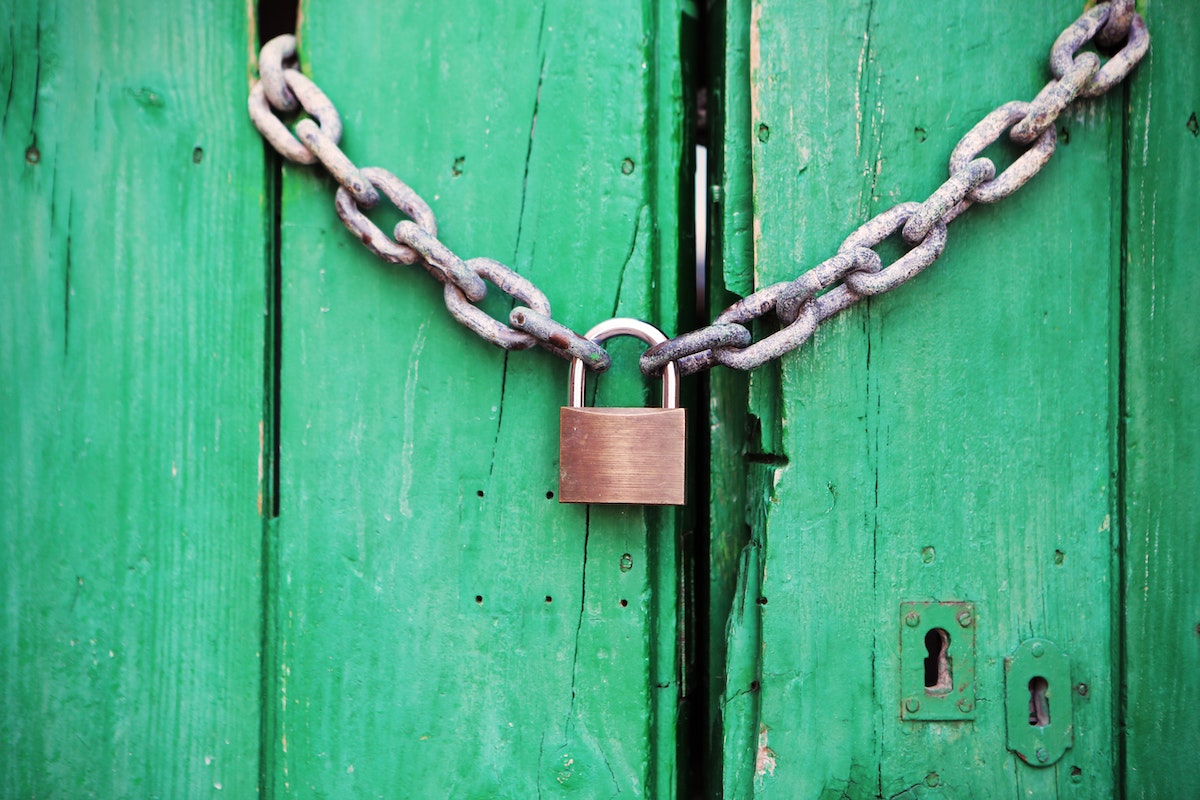 Physical access has been slow to move to the internet age.
This post provides a hands-on overview of the Doordeck platform and its integration capabilities.

The humble key has been with us for millenia.
In the last few decades, it has been replaced by magnetic and NFC access cards. 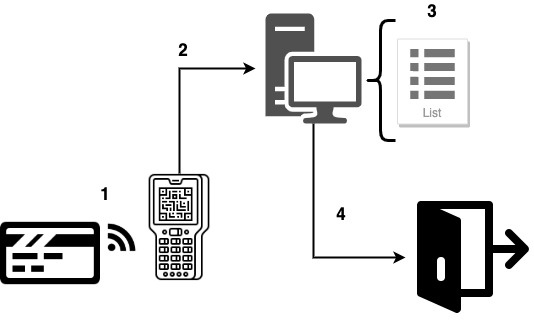 Though more flexible compared to keys, card-based systems leave a lot to be desired.
Cards can be lost or stolen as easily as keys. Once that happens, there is no way of preventing unwanted access without manually removing the card id from the whitelist first. Cards do not “recognize” an owner.
In addition, card-based systems are usually closed and installed on-premise. This makes them hard to manage and automate centrally.
If not offered out of the box, extensibility (one-time access, instant revocation, complex automation…) may be impossible.

The Doordeck platform 1 builds on top of the already installed offline access card infrastructure and makes it extensible via an API platform. This becomes possible by combining the capabilities of Android / iPhone platforms with public/private key cryptography. 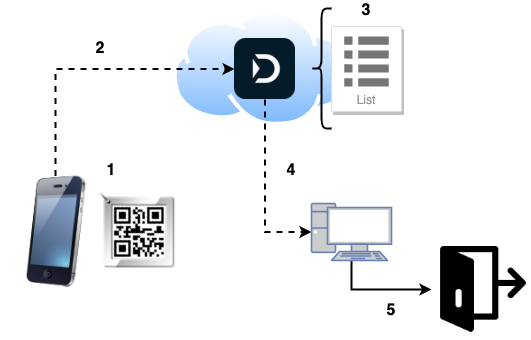 In this model, each user is identified by a public/private keypair. Depending on the access mode (direct or as a service), the keypair is generated on the Doordeck server or the mobile device.

Let’s see all of this in action through a hands-on example.

Security as a service

The underlying Doordeck entity model is quite simple.

For a test of the API we need to do 3 things:

We will be calling the staging version of the API.

This is fairly easy at the registration portal.
After logging in, the web application’s home screen looks rather sparse; we are not yet associated with any locks. 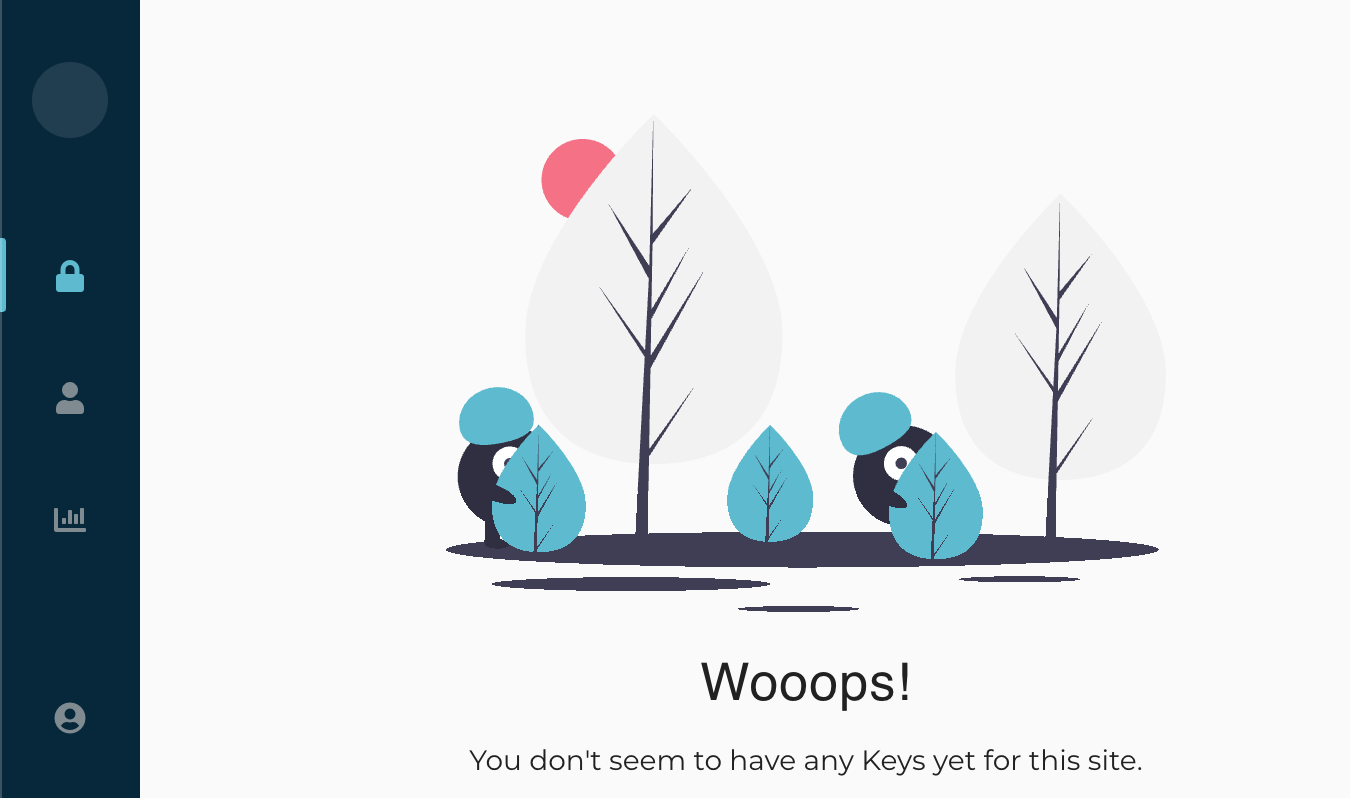 Associate with the demo door

First we need to discover our user’s identifier.
Let’s call the login endpoint, replacing the EMAIL and PASSWORD with your credentials from the registration portal.

Copy the printed token and paste it in the debugger of jwt.io.
This will show us the internal identifier of the User. 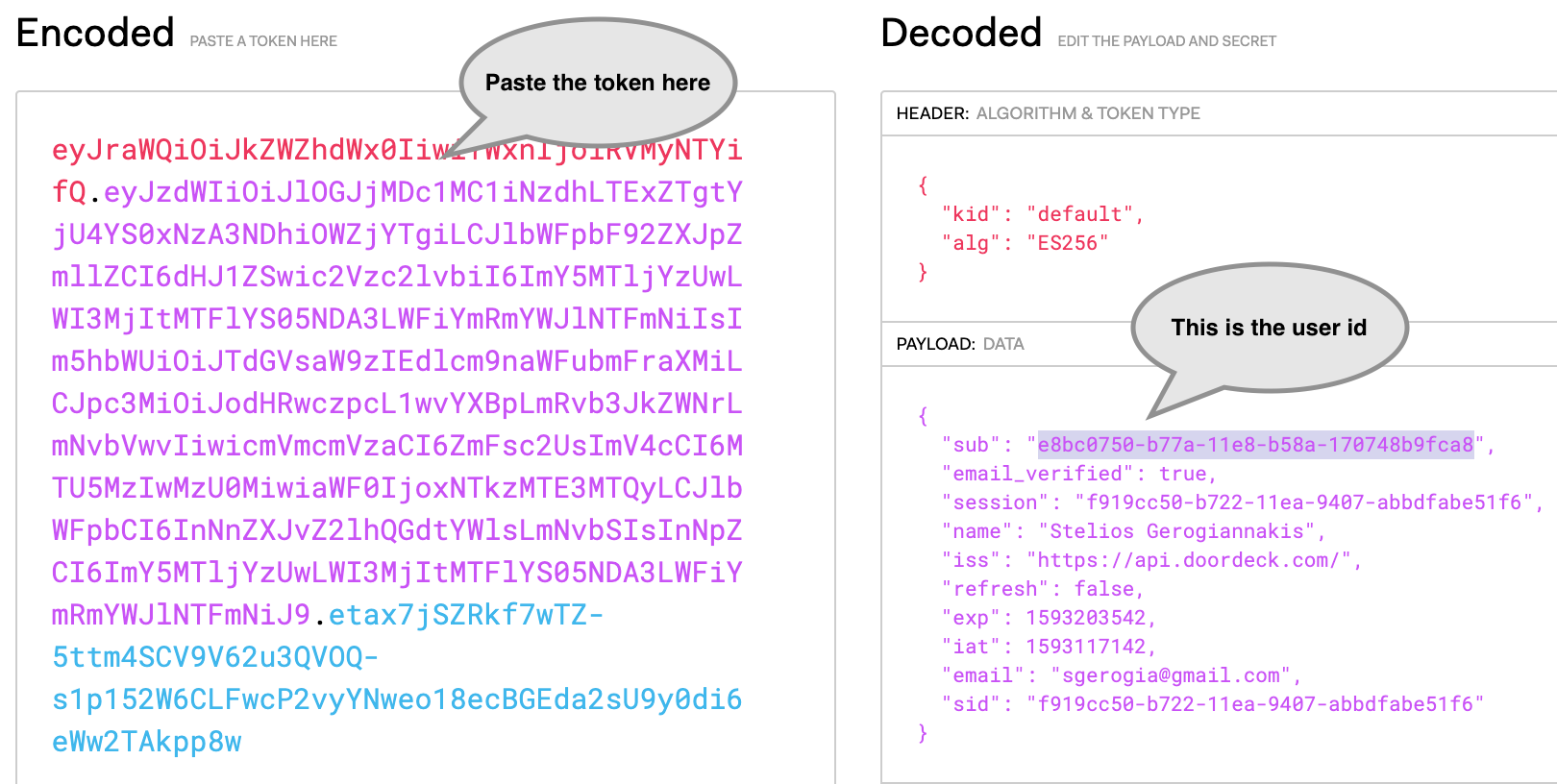 User id in the authentication token

To associate with the demo door, we will use a simple web form, which exists to facilitate testing.
Paste your user id and click Submit.

You can verify the association by refreshing your home screen in the web app. 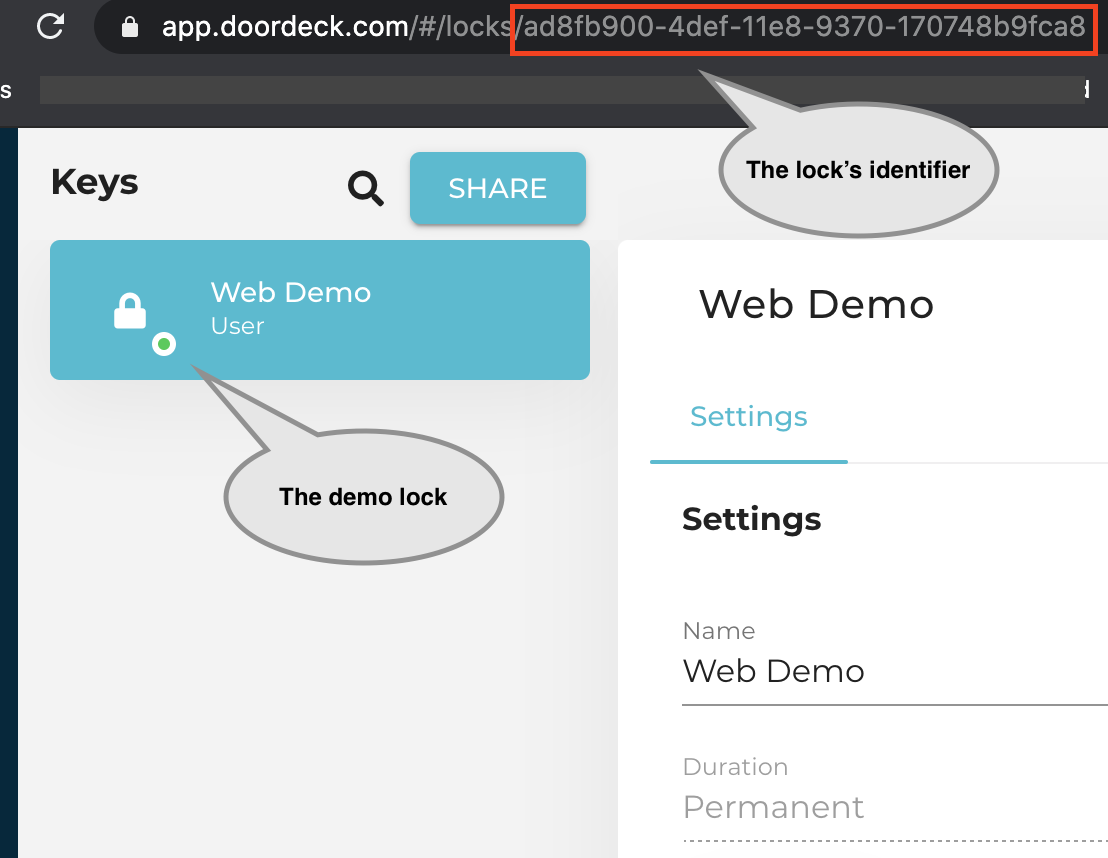 Demo door in the web app

In a real-life scenario, the task of associating a User to a Lock, would be done by an admin, using the relevant lock update API call.

You are all set to…

On making a login API call, each user is issued with

When sending a signed authentication payload, the Doordeck server imposes a time limit of up to 60 seconds from the time of signing to making the API call. This time constrain serves to prevent replay attacks.

This security feature also makes it hard to test the API by hand; one needs to be typing super-fast.
For this reason I have created the following utility script, which

Save the above script as an executable shell script and open a browser to the demo door’s web page.

Run the script, switch to the demo door’s page and… voila!

Security as a Platform

Doordeck takes the concept of secure access further by offering an integration platform.

This allows third parties and developers to offer access automation as an add-on service through their existing systems and applications.
The applications range from tenant experience applications, offered by large property managers, to centralized industrial facility management to vanilla office management.

The conceptual entity model of the Doordeck platform is slightly different.

Let’s see how that works end-to-end, using the staging API.

The integrator Application needs to identify itself to the Doordeck API. 2

We start by registering the application in the Doordeck portal. 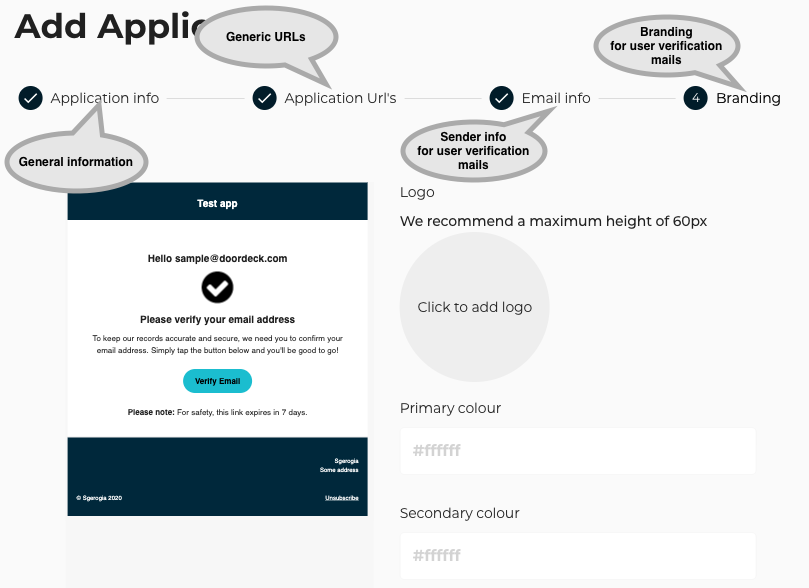 The application uniquely identifies itself to the API using a URL.
This is called Auth domain in the Doordeck portal. Once defined, it will need to be specified verbatim in the iss field of all JWTs sent to the API.

We will also need to upload the public key of the application.
The application will sign JWTs with its private key as an authentication step every time it calls the Doordeck API.

The developer portal requires the upload of the public keys in JWK format.
For test purposes, this can be generated manually at https://mkjwk.org/, making sure to only select an algorithm from the relevant RFC-mandated list (e.g. RS256).
The website can also generate the keys in PEM format. We will needd PEM to automate the local signing of the payloads. 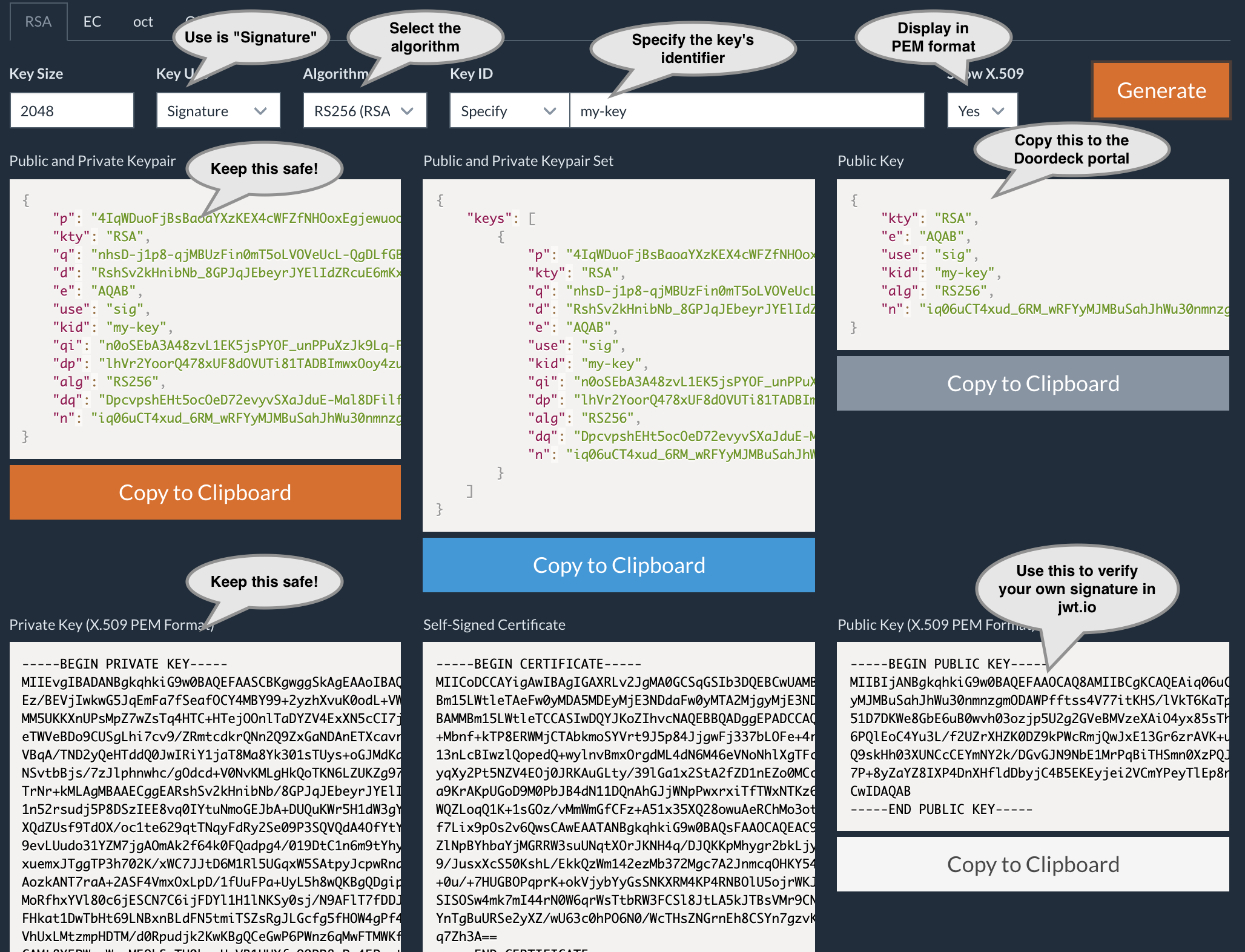 Alternatively, if you have

you can take a shortcut and generate the keys using the following little script.
The script

Paste the public JWK (publicKey.jwk) in the Doordeck portal. This will be used to verify your application’s API calls.

Save the PEM files because we will need them when we…

As we saw in the previous section, upon user login, we receive a private key with which to sign API call JWTs.

The following script assembles, tests and saves such an authentication token using

Save the script somewhere as step1.sh and run it.

The 3rd party application on the App User’s phone needs to unambiguously and securely identify the user and her phone to Doordeck before unlocking a door.

To achieve this, the Doordeck mobile SDK generates a new Ed25519 keypair, when the user logs in to the device.
This is sent to Doordeck, “registered” against the App User’s “profile” and comes back as a signed certificate.
This proves

To emulate these steps manually, we can utilize the Pynacl Python library, for generating and handling Ed25519 key material.
After installing Pynacl, save the following Python 2.7 script as ed25519.py in the current working directory; we will be calling its methods.

Let’s pretend that the App User has opened the 3rd party mobile application.
The SDK generates an Ed25519 keypair and sends the public key to the Doordeck API, along with the current App User’s details.

We have already constructed and saved an authentication token from the previous script, so we will re-use that token.

‍This script (let’s save it as step2_1.sh) does the following

If the App User’s e-mail is a valid one, then she will receive a confirmation mail like the following 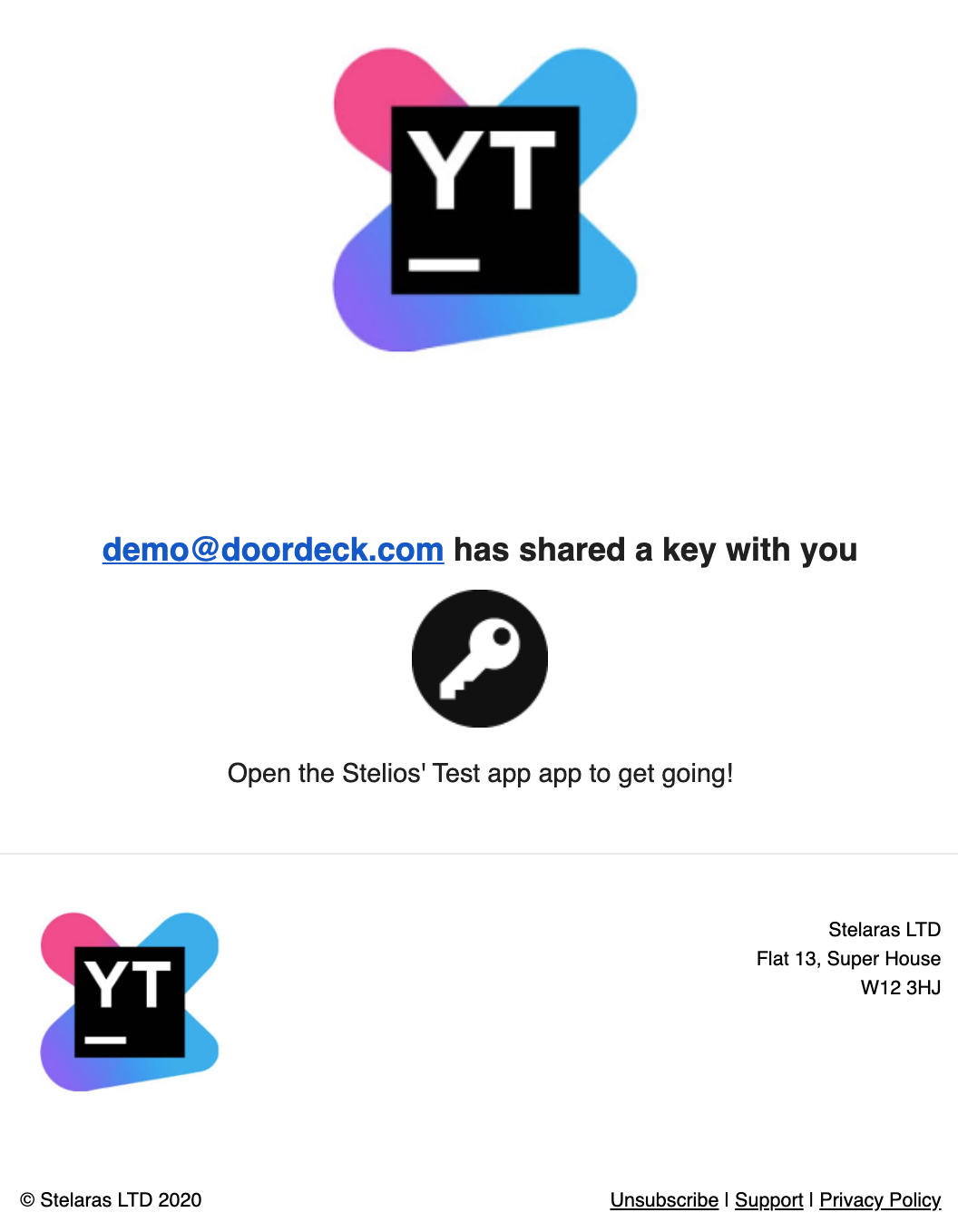 Associate the App User with the demo door

Go to the web form, paste the App User id printed from the script you have just run and click Submit.

And now we are again ready to…

The following script (let’s call it step_2_2.sh) is using all of the artifacts we gathered in our previous steps.
Namely, it loads

Open a browser to the demo door’s web page.

Run the script, switch to the demo door’s page and watch the door being unlocked.

Connecting physical access to the online world is a necessity.

As expected there are various other systems attempting to achieve this. These range from adding mobile access as an afterthought to high capex costs for Bluetooth readers to complete door hardware replacement.

Doordeck occupies a sweet spot in the physical access vertical, as it balances 3 almost competing priorities:

As organisations find a new modus operandi post-Covid (socially and financially), the Doordeck platform will provide solutions to many of the new challenges they face.

« How things change: Altering the behavior of others Getting PAID: An intro to Angel Investing - Part 1 »
comments powered by Disqus